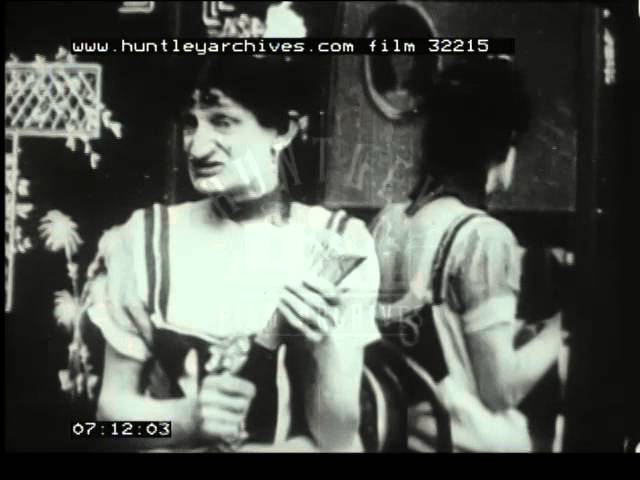 A collection of early films by Thomas Alva Edison and his film company from the 1890’s and 1900’s, some reprduced as part of later documentaries (? 1910s?) on the company’s history.

A) The exterior of Edison’s ‘Black Maria’ revolving studio made with black tar paper, in East Orange, New Jersey, U.S.A.

The Edison office building (?), a simple 3/4-storey structure with a large ‘EDISON’ on the roof, attached to what looks like a greenhouse, a leafless tree in the foreground.

A shot of the exterior of ‘The Black Maria’.

Gilbert Sarony in drag as a well-to-do old maid: a wig of dark curls, flowers and accessories in his hair, makeup and two large ‘moles’ on his cheek and chin, a corsage, a choker; he carries a folding fan and sits between a dressing mirrior and chinoiserie/japonaiserie folding screen. The old maid speaks animatedly and affectedly as if flirting with someone offscreen, giggles, fiddles with her fan, fans herself, looks coy, looks ‘scandalised’, flaps her wrist energetically in mock horror, grinning widely, fans herself again.

Five men in jacket and tie, wearing boaters and tophats, one young boy in a suit and cap, sit sprawled comfortably over the cushioned bench inside a streetcar, talking and joking animatedly among themselves; behind them, wooden windows, and above, a line of advertisements for Edison’s Kinetoscope, gramophones, etc. A pretty young lady in a hat and long dress enters; four men instantly spring to their feet, greet her charmingly, tip their hats, while the fifth tips his hat and moves along the bench making space for her; the lady nods graciously and sits down.

Several half-naked boys sit on the bank by the edge of a river, wooden tubs beneath them; crowds watch on the grass behind them; they clamber into the water and wrestle with their tubs, trying to stay in them while paddling downstream; one boy breaks away from the group early, but the others soon get on their way.

‘ “LEAP FROG” ‘
The corner of a schoolyard (?): several boys in jackets and breeches play leap frog along the brick wall, moving toward the camera; when done, two boys squash themselves against the wall as two more boys, bent 90 degrees at the hip, one behind the other, push against them for support; they form human bridges which six other boys jump onto from a running start, and ride, one crammed behind the other. The structure collapses, they try again and again.

B) Only ‘BOYS AFTER SCHOOL’

C) Intertitle: ‘In 1900, there appeared a forerunner of Flora Finch [an English actress who entered the American film industry in 1908-9 playing an ‘old maid’s’ role]. The following scene is all these is to this ancient comedy – there isn’t any more!

‘A year later, in 1901, a wee bit of story developed, all in one painted scene, but a big step forward, nevertheless –
‘EDISON PLAYERS PRESENT: STREET CAR CHIVALRY
‘Note the single strap in the studio street car – and the fashions of the fairer sex!’
The film, as described in (A).

D) Intertitle: ‘EARLY FILMS OF RECORD
‘Now a wide range of subject matter opened for the camera. Not the least was the filming of important personages and events, a direct antecedent to the newsreel which was to come in 1910. The bit here of McKinley speaking at the Pan-American Explosion in Buffalo was taken just before his assassination.

‘1896: MCKINLEY’S INAUGURATION.
President McKinley and escort going to the capital.’

‘1898: ADMIRAL DEWEY ABOARD THE OLYMPIA AT MANILA BAY

The Olympia, a white battleship with the American crest painted on the bow, bunting/flags tied to the mast, enters Manila Bay. Silhouette of naval officers pacing the deck, beneath a canopy; Admiral Dewey, recognisable with his thick white moustache, is among them. Photograph of Dewey, in full naval uniform and medal (head and shoulders shot).

McKinley in a suit, without a hat, addresses a moderately large crowd of well-dressed men, woman and policemen.

E) Probably French film fantasist Georges Méliès as a magician, a table in an empty room; he produces two squirming rabbits from his top hat one after the other, places them on the table, turns them into one rabbit, waves that rabbit which disappears into thin air; takes his bows.

F) A man turning the handle on a Mutoscope. Close-up of the cards tightly packed in a rotating order inside the device, being flipped as the handle turns; a moving picture can be discerned. The view through the peephole: a cowboy riding a bull at the Livermore Rodeo.

tube
16.9M
“Girls Like You” is out now. http://smarturl.it/GLY For more, visit: https://www.facebook.com/maroon5 Tweets by maroon5 https:...